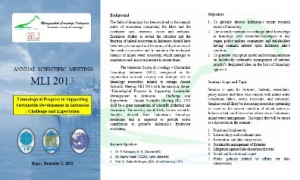 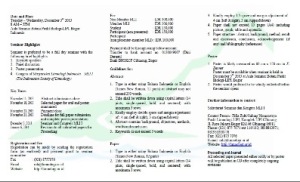 Indonesia’s attention to the issue of environmental damage is increasingly intensifying. One cause of the worsening environmental conditions is due to natural resource management that cannot be renewed or can be renewed has exceeded its carrying capacity. Environmental sustainability and ecosystem levels are not maintained anymore, therefore the parties involved, in this case, the private and state enterprises, governments and communities need to develop good cooperation and synergy for sustainable environmental management.

If the quality of the social life of the community in question is good enough, then the ability to support environmental conservation programs would be the better. Regional development in buffer zones and transition areas should be done to create economic activities that benefit the community in the region in order to preserve and protect the core area. Activities undertaken include the development of the application of appropriate technologies that can meet the basic needs of communities around the reserve, including water supply and other economic resources. The implementation programs of economic development in buffer zones and transition areas were expected to be the balance between the interests of conservation with the economic interests of the development of biosphere reserves.

The majority of areas in Riau Province and Midle Kalimantan Province have the land with peat surface water. The characteristics of the peat water are:

This kind of surface water is basically not suitable as raw water for drinking water. Compared with other surface water that is fresh water, the water from the turf needs to be processed specifically by adding stages in the process . In order to improve the efficiency of water treatment plant, it would require a review of potential issues that may arise in every phase of water treatment process. Meanwhile the first phase of this research activity aims to conduct field observations in order to determine the mounting location of IPAG and to learn about the readiness and willingness of local communities to adopt appropriate technologies that will be implemented.

Peat water treatment technology that has been established in previous studies (2009-2011) allows the peat areas have peat water treatment facility for drinking water supply. During the implementation and testing of the water treatment facility is limited in the area of peat Katingan, Central Kalimantan province, meanwhile, a lot of territory in some areas in Indonesia, especially Sumatra and Kalimantan, which has a clean water source issues. Implementation of this technology in the wider area is necessary to support the increase in water services in the region.

Subak is the name of the water management (irigation) system for paddy fields on Bali island, Indonesia, developed more than 1,000 year ago. Over that time, this traditional ecologically sustainable irrigation system has constantly adjusted to changing situations. The result is an intricate system which is strongly interlinked with Bali’s natural, social, cultural and religious environment.

Demosite ecohydrology for the management of community-based on water resources

Pesantren community is a community that is strong enough position in society and is led by a leader who generally become role models in the society, so expect a transfer of knowledge from outside the community to be relatively easy to do through the personal.

1). Pesantren is a formal educational institutions at the primary level to advanced, then education about water resources can be inserted in the thier place and one of them is through the presence demosite

2). Number of pesantren in Indonesia is quite a lot, although the exact number has not been recorded with certainty, but the overall estimated pesantren in Indonesia could empower up to 20 million people.  The success of socialization and campaign sustainable management of water resources in the pesantren community demosite location will be used as a model for other Islamic communities and ultimately the general public.

Pesantren Al-Risala in Kudat District selected as one of the locations where development demosite demosite this has been done in 2012 and will continue in activity in 2013. Together with students (students / santriwati) and local pesantren Al-Risala total involving approximately 2,700 people consisting of students who were settled (Boarding School), teachers and support personnel who are mostly local people.

Water sources are used to meet the water needs of the daily boarding comes from ground water and river water Cijantung.  Groundwater is used by making use of artesian well water while the river is done by first doing a simple processing tanks through coagulation, flocculation and filtration. Thing that needs attention is the quality of river water is used if it meets quality standards for allotment of domestic activities including for the purposes of hygiene and sanitation. Sewage disposal system in boarding schools is still open or open dumping in the environment.  Solid waste and liquid waste is disposed of in open landfills in the location which is located in the backyard boarding.  While domestic solid and liquid waste discharged directly into water bodies through the pipes without prior processing. This of course would be bad both for the local air and water quality and public health given the quality of river water is used directly.  Quality of raw water used and waste management boarding occupants were assessed less well become the focus of attention improvement of water resources management at the site through demosite ecohydrology

In the early stages of development demosite ecohydrology at Pesantren Al-Risala Kudat focused on improving the quality of domestic water and waste management. Domestic wastewater treatment is done with the manufacture of artificial wetlands (Constructed Wetland), hereinafter referred to as wetland. This wetland functions to improve water quality of domestic wastewater originating from the bathroom, kitchen and ablution place that is not directly discharged into the river water bodies. Meanwhile, domestic solid waste will be collected on a communal septic tank where water runoff can flow into wetland. For improvement and quality of water supply to schools, future planned for the manufacture and installation of water treatment plant at the location of schools by utilizing river water as a raw material.

The countries in Asia and the Pacific region, with different climate characteristics are vulnerable to hydrological extremes and the global changes increase the uncertainty associated with extreme events. Some of these countries are vulnerable to floods and annual flood losses are too high for any government to bear. In the framework of the International Hydrological Programme focusing on the impacts of climatic variability and changes, the activity intends to strengthen, in the ASPAC Region, scientific approaches for improved water resources management policies and governance with reference to hydrological hazards and extreme events via specific efforts such as enhancing water related technical capacity-building and education at all levels, and supporting national and regional efforts to develop, integrate and complement capacities to reduce and address risks arising from land-based and freshwater natural disasters.

As a continuation of comprehensive study on Flood Forecasting and Warning System (FFWS) conducted in ten countries (Australia, Cambodia, China, Indonesia, Lao P.D.R, Malaysia, Philippines, Rep. of Korea, Thailand and Vietnam), the activity together with The UNESCO Category II Water Centre ICHARM (International Centre for Water Hazards Risk Management), will focus on the organization of country training courses on the Integrated Flood Analysis System (IFAS) and FFWS data interpretation and implementation in the region, draw the related conclusion and propose to government related agencies, through IHP National Committees, possible management guidelines to deal with FFWS. The activity is intended to focus on sharing knowledge/experience and improve capacity building by enhancing UNESCO-ICHARM collaboration through the training courses on Integrated Flood Analysis System.

APCE proposes to organize of training course on IFAS in Jakarta, Indonesia with the following venue: